Having finished building the frame of the iTopie, I began installing all the components of the iTopie one by one.

Followed the steps as given on the Y axis build wiki. I used 35mm M3 screws instead of the 30mm as on the wiki, mostly because my frame is made of 18mm MDF instead of the 16mm MDF used in the wiki's build.
I also needed to grind the ends of the smooth rods as they were a bit longer than 400mm. I then hammered the rods in using a soft hammer. I loved the design of the Y-axis, it is very sturdy, that rod is not going anywhere! Plus, the belt tensioning mechanism is just awesome, requiring you to rotate the motor to provide tension in the belts.

To fix the y-axis stepper to the frame, I used a 20mm and 25mm M3 screws with 3 washers on each screw.

I used the X-axis of my existing Prusa Rework printer. iTopie's X axis is compatible all Prusa i3 X-axis. I do not have space to keep two 3d printers, so I will reuse as many parts of my old printer as possible. I just replaced the smooth rods of the X axis with 380mm rods and they aligned perfectly with the smooth rods holes of the z-axis.

I will also be reusing the direct hinged drive extruder with E3D v5 hotend, which is very similar to the following design. I have tried v6 extruders, but have had problems printing PLA with it. So I am sticking to v5 for now.

I have printed the parts for the Wade L3K Extruder. I am waiting on the hobbed bolts from China. Once I receive it, I will replace my hinged extruder with the Wade Extruder.

If you have iTopie X-Axis parts, then use the X axis build wiki for assembly information.

Followed the Z axis build wiki again here. I had to hammer the Z rods in place. I was initially apprehensive about the stability of the Z rods as there is no clamping apart form the 18mm support provided by the frame. But it turned out to be very sturdy. Just in case I needed to add external clamping, I had printed the following design, but I found no need to use it.

I used the Mk2 PCB heat bed. I used Kapton tape to add a 3mm cotton insulation to the bottom of the heatbed to decrease heat loss. From top to bottom, my build surface is as follows:


I used 35mm M3 screws to mount the heatbed on the Y-carriage.

I used a 12V 30A power supply. I decided to mount the PSU on the sides like on standard Prusa's. In iTopie's build wiki they have placed the PSU on the bottom. I designed the PSU holder on OpenSCAD.
I used 3 4x20mm drywall screws to fix the holder to the frame. 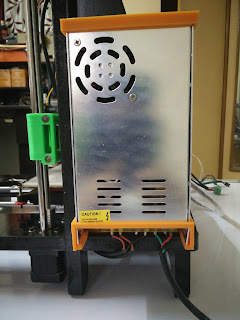 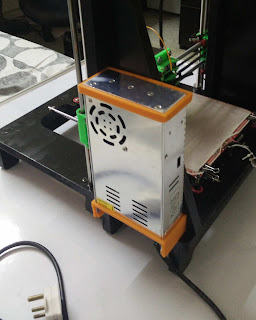 I mounted the RAMPS on the left side of the printer. I designed a minimalist RAMPS holder that can be fixed to the iTopie's frame using just one 4x20mm drywall screw.

Now comes the messy part. The original iTopie has great wire organisation. I couldn't achieve the same level of organisation, but it is better than my older printer.
I routed the 12V supply cables, Z-axis cables and Y-axis cables through the underside of the frame. I designed and printed about 10 small 1cm x 1.8cm zip tie holders, that I stuck to the frame using 2 sided tapes.
On the side closer to RAMPS, I segregated the cables into 7 parts:


My iTopie : All installed and ready to print

COMING SOON : Bill of Materials and other helpful resources to help anyone in India source parts for an iTopie.